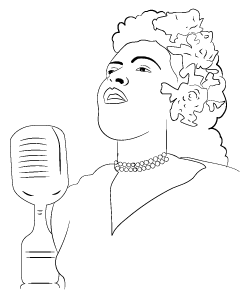 It’s been three years since my father, Mort Zakarin, passed away at the age of 89.  Mort was a jazz musician in the 1940s, playing saxophone and clarinet – in high school, in the U.S. armed forces, as a conservatory student, and finally as a touring musician and arranger.

He later wrote a number of memoirs on his experiences, which I am proud to share with you.  Here he tells about his encounter with the great Billie Holiday.  – Yosi

I met Billie Holiday when I was about thirteen.  Well, not really.  You see, me and a few of my friends were invited to this girl’s apartment.  We were going to dance, which was the next best thing to hugging.  Of course, the girl’s parents were in the next room…

The record player was going full blast, and we were dancing the ‘Lindy Hop’ to a Benny Goodman record.  After that, someone said, “How about a slow song?”  Our hostess put on another record.  It was Billie singing Embraceable You, and I was smitten.

Many years later, during World War II, I was in New York on a brief furlough from the Army Air Corps band in Greensboro, North Carolina.  Growing up, I had always heard about all the jazz clubs on fifty-second street in Manhattan.  I was a young, budding musician – where else would I go?  That very first night, I headed up to the street of my dreams.

I couldn’t believe my eyes.  Billie was singing at the Downbeat Club.  I entered a dimly lit, rectangular room with a bar to the right.  The rest of the room was packed with small tables, filled with people.  And there she was – with a white gardenia on the right side of her head next to her ear.  I truly can’t remember what she was singing, but whatever it was, was just wonderful.  I was in heaven.  When she finished the set, she came to the bar, stood next to me and ordered a brandy and milk.  I really didn’t know much about liquor at the time, but I had to say something.  “Oh my, how can you drink that?”  That was the best that I could do.

She looked up at me and smiled, “Well, it truly isn’t easy.”

“I’m a musician with the Army Air Corps Band.”

“Really, and what do you play?”

She said, “You and Benny,” laughing merrily.

I must have blushed, because she laughed again and kissed me on the cheek.  “I’ve got to go back on, but hang around and we can talk some more.”

Billie turned to the bartender, “His drinks are on me.”  Stroking my cheek, she was off.

What a night it was.  She sang and I flipped.  After the gig, we went to her pad, but I’ll be dammed, I can’t remember where it was – but we talked for hours, all about my dreams of being a great musician.  Billie was a wonderful listener.  At about four that morning, her boyfriend, a trumpet player named Joe Guy, walked in, and I left.

In 1949, the war was over and I was back in New York, rehearsing with the Boyd Raeburn Band at Nola Recording Studios.  Billie was in New York, too, performing at the Strand Theatre.  Well, who walked in to see Boyd… but Billie herself.  The band stopped and looked on in awe as she said hello to Boyd.  Then Billie then turned around, looked at me, and said, “Holy shit, is that you Zak?”

“Well come here,” she said.  I put my sax down and walked over to her.

“Zak, how the fuck are you?” she asked as she put her arms around me and kissed me on the lips.  A moment later, she was gone.

My bandmates looked at me as if I’d just been kissed by God.

I never did see Billie again, but when she died, I cried.  I have a mountain of her records, but I don’t listen to them too often.  It kind of hurts.